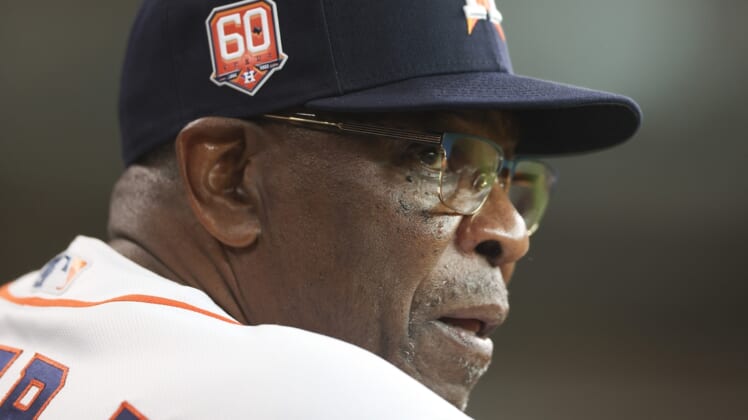 The first matchup of the Washington Nationals and Houston Astros since Game 7 of the 2019 World Series will feature one person with a unique understanding of what that winner-take-all clash meant to both franchises.

However, only Houston manager Dusty Baker’s current team will look anything like a World Series contender Friday, when the Astros visit the Nationals. It will be Baker’s first game against Washington since his managerial tenure with the club ended following the 2017 season.

The Astros ran their winning streak to 10 games and moved into first place in the American League West by winning twice Thursday afternoon. After beating the host Minnesota Twins 11-3 in the completion of a game suspended due to thunderstorms Wednesday night, Houston earned a 5-0 win in the regularly scheduled contest.

The Nationals fell 4-1 to the visiting New York Mets on Thursday in the rubber game of a three-game series. Washington has dropped six of its past eight games.

Baker led the Nationals to back-to-back National League East crowns in 2016-17, but he wasn’t offered a new contract after consecutive failures in the NL Division Series. He acknowledged Thursday he is still unsure why Washington didn’t retain him.

“I really enjoyed my time in Washington,” Baker said. “The two years I was there was probably some of the most enjoyable times that I’ve ever had in baseball, on the field and off the field.”

After two years out of the game, Baker was hired in January 2020 by the Astros — fresh off their World Series loss to the Nationals — when A.J. Hinch was fired for his role in Houston’s sign-stealing scandal throughout the 2017 World Series-winning season.

The Astros went 29-31 in the pandemic-shortened 2020 season but pushed the Tampa Bay Rays to seven games in the AL Championship Series. Houston made the World Series again last year — Baker’s first appearance in the Fall Classic since he was with the San Francisco Giants in 2002 — before falling to the Atlanta Braves in six games.

A 6-2 win over the Astros on Oct. 30, 2019 proved to be the closing of the championship window for the Nationals, who are 102-153 since then and appear on their way to a third straight last-place finish in the NL East.

Of the 12 players who appeared in the clincher, only superstar Juan Soto, fellow outfielder Victor Robles and pitcher Patrick Corbin remain with the Nationals.

A baserunning gaffe in the fourth inning Thursday underlined just how far the Nationals are from their World Series-winning moment. Soto got caught in a rundown between second and third on a grounder to third by Josh Bell, who went to second during the rundown but was thrown out after he tried to advance to third following an errant throw into right field by Mets pitcher Taijuan Walker.

“When we make errors like that, it hurts the whole team,” Soto said.

Valdez didn’t factor into the decision on Saturday, when he gave up two runs over six innings as the Astros beat the Detroit Tigers 3-2.

Gray earned a win on Saturday after surrendering three runs over 5 1/3 innings in the Nationals’ 7-3 victory over the Angels.

Valdez has never faced the Nationals, and Gray has never opposed the Astros.