More than a hundred candidates for the Maryland General Assembly signed a resolution to move Maryland to 100% carbon-free electricity by 2035 and remove trash incineration from the state’s “clean energy” classification during the 2023 legislative session.

The resolution — which was developed by the Chesapeake Climate Network Action Fund, the International Brotherhood of Electrical Workers Local 26, CASA of Maryland and the NAACP Maryland State Conference — demands that at least 40% of all clean energy and climate investments go to historically disadvantaged communities and that clean energy jobs include “family-supporting wages,” health benefits and bargaining rights.

This is the first “climate justice resolution” that Maryland state candidates have signed, according to Mike Tidwell, director of the Chesapeake Climate Action Network.

“We want 100% clean electricity in this state — not 99%, not 98% — we want 100%,” Tidwell said at a press conference in Annapolis on Thursday morning. But for the state to get there, “we have to have clean energy leaders,” Tidwell said.

The resolution states that race is the “#1 indicator of placement of toxic facilities” and that communities of color are 79% more likely to live near air pollution sources which increase the risk of cancer, neurological issues, and heart and respiratory illness. The pledge specifically calls out Baltimore’s Wheelabrator trash incinerator, stating that power plant emits high levels of air pollution and contributes to respiratory illnesses.

It further contends the state of Maryland should commit to an “equitable investment in environmental justice communities” and ensure economic benefits to low-income neighborhoods throughout the clean energy transition.

Madison Green, a climate justice fellow with CASA who lives in Prince George’s County, said any climate solution that does not center around the communities most impacted by climate change “is not a solution at all.”

Jain and running mates for Perez, King and Gansler came to Annapolis on Thursday to stand in support with advocates on the climate justice resolution.

Michelle Siri, King’s running mate, said their campaign sees this resolution as a “starting point for our environmental action — there’s so much that needs to be done.” 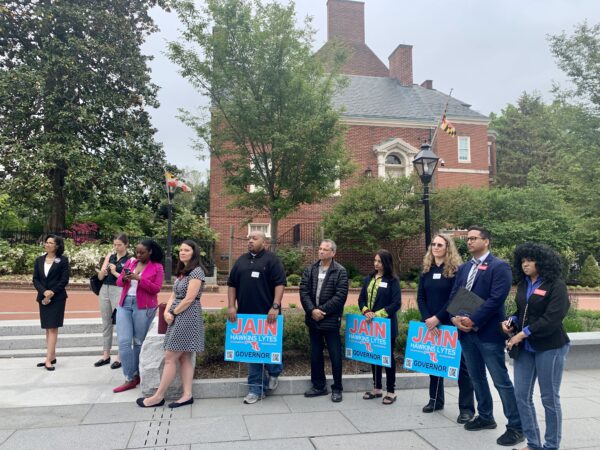 Shannon Sneed, Perez’s running mate, said she believes the state can support business, environment and labor at the same time. “We will create a cleaner, greener future and we can do it in a way focused on environmental justice for all so we can equitably provide lasting solutions, create good paying jobs and spur economic growth,” she said.

Former Hyattsville mayor Candace Hollingsworth, Gansler’s running mate, said safety does not mean just safety from violence but also clean water and air. She promoted expanding public transportation, such as the Red Line in Baltimore — which Gov. Lawrence J. Hogan Jr. (R) canceled — as an example that would have made Baltimore a safer city by connecting people to more jobs and opportunity.

Jain said he is committed to removing subsidies for trash incinerators and paper mills and mandating environmental impact studies for any bill in Annapolis that could impact the state’s infrastructure and the environment.

Donna Edwards has been endorsed by one of her powerful former colleagues in the U.S. House of Representatives, Speaker Nancy Pelosi (D-Calif.).

Edwards announced in January that she would run again for the 4th District, which she previously represented from 2008 to 2016, when she ran for U.S. Senate and lost.

“Donna Edwards has been a proven, effective leader throughout her career and has the reputation and experience to ensure that Prince George’s County gets its fair share of federal investment from Day One, fight to protect Social Security and Medicare, take action on climate change and work to ensure that every Marylander has access to the affordable health care and medications they need,” Pelosi said in a statement released earlier this week. “As a native Marylander, I welcome the addition of a woman — particularly a woman of color — to my home state’s delegation.”

In 2008, Edwards became the first Black woman elected to represent Maryland in Congress.

Edwards’ campaign has focused on her prior experience in the U.S. House chamber as a key factor in the campaign.

“I’m thrilled to have Speaker Pelosi’s support in our race to bring experienced leadership that can deliver from day one for Prince George’s County, and look forward to once again working with her to protect voting rights, take action on climate change, expand health care access, and requiring the wealthy to pay their fair share for a change in order to help reduce prices for all of us,” Edwards said in a statement.

Del. Neil C. Parrott (R-Washington), who is seeking the GOP nomination in the 6th congressional district, picked up the endorsement of the Conservative Political Action Coalition (CPAC).

“Neil Parrott has what it takes to fight against the socialist Democrats in Congress,” CPAC, the political arm of the American Conservative Union Foundation, said in a statement. “Neil is fighting for secure elections, the right to life, and less government interference.”

Parrott is seeking a rematch with Rep. David J. Trone (D), who defeated him by almost 20 points in 2020. But the 6th District has taken in more conservative territory in the state’s new congressional map, plus this election is shaping up to be better for the Republicans nationally.

However, Parrott does not have the Republican field to himself. His five GOP primary opponents include Matthew Foldi, a conservative journalist, and Mariela Roca, an Air Force veteran.

“I am honored and thankful to receive this endorsement from CPAC,” Parrott said in a statement. “They work diligently to promote common-sense conservative ideals. I look forward to working to support families and individuals by defending and expanding their freedoms as I campaign for Congress and then hopefully go to Congress early next year.”

Danielle E. Gaines and Josh Kurtz contributed to this report.