The latest intel on the top prospects

Before A World Cup, Ida Sports Rivals Nike And Others To Give Women Suitable Soccer Boots

Memphis Officers Had Been Reprimanded After Using Force

Netanyahu’s strategy: Don’t get ‘hung up’ on peace with Palestinians first


More than two thousand individuals are expected to gather Saturday in Miami to rally in support of abortion rights amid a Supreme Court decision that could overturn Roe v. Wade.

The rally will be one of hundreds set across the county this weekend as part of “Bans Off Our Bodies” demonstrations — a national, organized call to action put out by Planned Parenthood Federation of America, Women’s March, MoveOn and UltraViolet to advocate for abortion access.

The Florida LGBTQ+ Democratic Caucus released a statement on the “Bans Off Our Bodies” rallies happening around the country Saturday.

“Today, Floridians across the state will make their voices heard in support of the right for women to make their own health care decisions. This right to privacy is enshrined in the US Constitution, and is fundamental to our democracy. If Roe v Wade is overturned by the US Supreme Court, other key rulings are in doubt, especially those expanding rights for LGBTQ+ Americans,” Caucus President Stephen Gaskill said in a statement. “Never before in our history have we restricted rights that have been fought for and won, and this risky precedent will endanger lives and cause irreparable harm to our country. We are marching today for the right to control our own destiny. This is what America is all about.”

Bans Off Our Bodies Miami was organized by a grassroots coalition of local activists and organizations, including Miami Coalition to Advance Racial Equity (MCARE), Miami National Organization for Women (NOW) and Blue Wave Coalition Miami Dade. 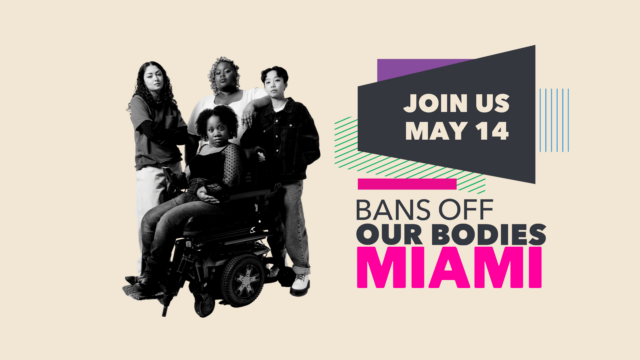 “I am outraged that men like Justices Atila and Kavanaugh want to strip ourbodily autonomy,” Miami NOW co-chair Columba Yebaile said in a statement. “Members of the Latinx community already face disproportionate barriers in accessing health care including abortion. Roe is the minimum, and to have that removed is absolutely unacceptable to me. As a Latina and a mother, I am ready to fight for the rights of my community and future generations.”

The event in Miami will start at 11 a.m. in Ives Estates Park, and will feature Florida elected officials including Agriculture Commissioner Nikki Fried, City of Miami Commissioner Ken Russell, among others. The event will also include the following speakers and performers: Tify Burke from Southern Birth Justice Network, Trenise Bryant from Women With Broken Heels, Landon Wolston and Jack Lee Jordan with Transpire Trainings, Samantha Duran from the Miami-Dade Democrats Disability Caucus and Board Member Franzella Guido Chacon from Ruth’s List Miami.

“We will not go back, and we will not be silenced,” Kat Duesterhaus, Board Member of Miami Coalition to Advance Racial Equity, said in a statement. “We’re sending a clear message that the majority in this country support abortion and that all people deserve access to abortion care when they need it, on the timeline they choose, and in the community they trust.”

The coalition fears that overturning Roe V. Wade is only the beginning, citing the recent passage of HB 5 in Florida, which bans abortions after 15-weeks of pregnancy. Other state legislatures working to ban abortion at any time, and to criminalize various forms of birth control and traveling for access to reproductive health care.