So this is education | Opinion 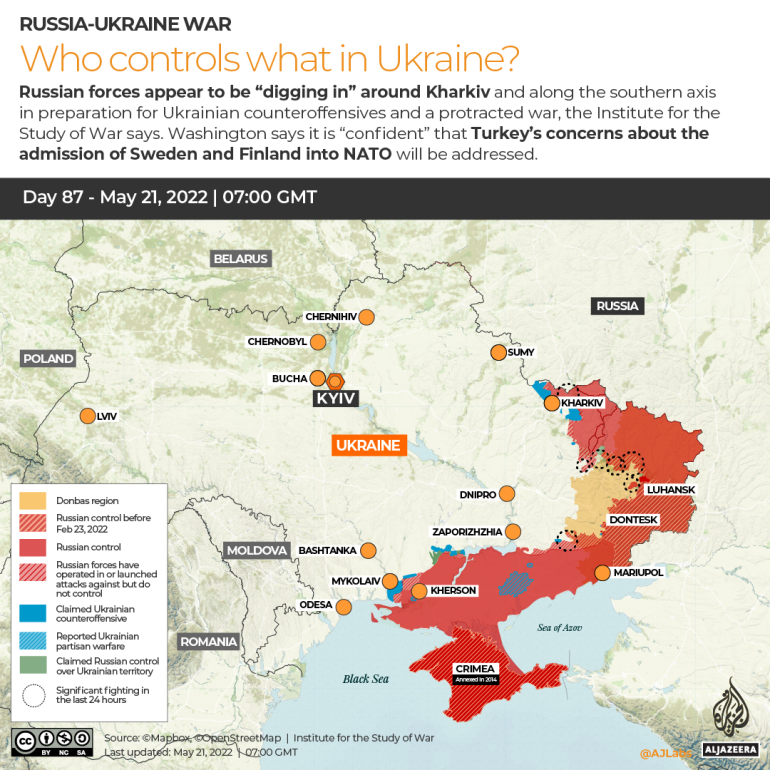 Here are all the latest updates:

The Luhansk governor has said 57 people were evacuated from the region on Saturday, adding that it was very “hot” in Severodonetsk, Lysychansk and the village of Bilohorivka.

“The shelling does not stop even for an hour. The Russians use artillery day and night,” Serhey Haidai said.

“Every life of the 57 rescued from these communities is important to us today. They are intact and already safe,” he added.

Ukraine says agreeing to ceasefire with Russia will only escalate war

Ukraine’s presidential advisor has dismissed as “very strange” calls in the West to negotiate an urgent ceasefire with Russia that would involve its forces remaining in territory they have occupied in Ukraine’s south and east.

Mykhailo Podolyak told Reuters making concessions would backfire on Ukraine because Russia would hit back harder after any break in fighting.

“Any concession to the Russian Federation would instantly lead to an escalation of the war. So the war will not stop. It will just be put on pause for some time,” he said.

“After a while, with renewed intensity, the Russians will build up their weapons, manpower and work on their mistakes, modernise a little, fire many generals… And they’ll start a new offensive, even more bloody and large scale, taking into account all mistakes,” Podolyak added.

Russian forces have intensified efforts to encircle and capture Ukraine’s Severodonetsk city in Luhansk Oblast and will likely continue to do so in the coming days, the Institute for the Study of War has said.

“Russian troops in Luhansk will likely move to capitalise on recent gains made in the Rubizhne-Severodonetsk-Luhansk-Popasna arc to encircle and besiege Severodonetsk – the final Ukrainian strongpoint in Luhansk Oblast,” the US-based think-tank said.

According to ISW, Russian military bloggers are hypothesising on the success of Russian tactics in the area and have dubbed it the “Battle of Severodonetsk”.

#Russian forces intensified efforts to encircle and capture #Severodonetsk on May 21 and will likely continue to do so in the coming days as efforts on other axes of advance, including #Izyum, remain largely stalled.

Ukrainian director Dmytro Sukholytkyy-Sobchuk has criticised the Cannes Film Festival for including a Russian director in its line-up.

The festival has banned official Russian delegations from attending, but Russian dissident Kirill Serebrennikov, who has spoken out against the invasion of Ukraine, premiered his in-competition film “Tchaikovsky’s Wife” at the festival on Wednesday.

“When he’s here, he is part of the Russian propaganda, and they can use him,” Sukholytkyy-Sobchuk told Reuters.

The Russian director Serebrennikov had said earlier this week that Russian culture should not be boycotted, saying that his culture “has always promoted human values”.

The Ukrainian director Sukholytkyy-Sobchuk described the sensation of being in Cannes while his country fights against a Russian invasion as “alien”.

There are 78 women among the people captured by Russian forces from the besieged Azovstal steelworks in Mariupol, a pro-Russian separatist leader said.

Russia’s TASS news agency reported the Donetsk separatist leader Denis Pushilin as saying there were also foreigners among those taken prisoner from the Azovstal steelworks. He did not state how many foreigners were taken prisoner.

“They had enough food and water, they also had enough weapons,” Pushilin told TASS.

“The problem was the lack of medicine,” he said, referring to the Ukrainian forces that had held out at the steel plant.

“We are going to study the possibility,” said Leonid Slutsky, a senior member of Russia’s negotiating team on Ukraine, the RIA Novosti news agency reported.

Slutsky did not say the number of Azov fighters Moscow was considering for exchange.  A separatist leader in eastern Ukraine has said nearly 2,500 Ukrainian fighters were in custody and were sure to face tribunals.

Medvedchuk, 67, is a politician and one of Ukraine’s richest people and is known for his close ties to Putin. He escaped from house arrest after Russia’s invasion of Ukraine in February but was re-arrested by Ukrainian forces in mid-April.

Ukraine says Russian forces are responsible for the deaths of seven civilians in the area of Donetsk in the east of the country that is under Moscow’s control.

Meanwhile in Kherson, occupied by Russian forces, local administrators accused Ukraine of killing three civilians and injuring 10 in the village of Biloserka, in a statement on Telegram.

Ukraine ready to exchange its soldiers for Russian prisoners of war: Zelenskyy

Zelenskyy says his country is prepared to exchange its troops who surrendered at the Azovstal steel plant in Mariupol for Russian prisoners.

In an interview with a Ukrainian television channel, Zelenskyy said the most important thing for him was to save the maximum number of people and soldiers. “We will bring them home,” he said.

Russia claims to have taken full control of the besieged city of Mariupol after the last group of Ukrainian soldiers surrendered.​​

Zelenskyy has said he talked to Italian Prime Minister Mario Draghi and stressed the importance of more sanctions on Russia and unblocking Ukrainian ports.

Zelenskyy tweeted that he had also thanked Draghi for his “unconditional support” of Ukraine’s bid to become a member of the EU. Draghi had initiated the call, he said.

Hello and welcome to Al Jazeera’s continuing coverage of the war in Ukraine.

Read all the updates from Saturday, May 21 here.