Bruce Smith had the college football world in his hands. The 21-year-old running back for the Minnesota Golden Gophers had just led his team to the 1941 national championship, and on Dec. 7, was riding a train to New York to accept the Heisman Trophy.

As the train kept rolling, news came that would stop the United States in its tracks. The Japanese had bombed Pearl Harbor. Smith arrived to a stunned city. There would be no ticker tape parade. Instead, prior to accepting his award on Dec. 9, Smith was told to complete his remarks before President Franklin D. Roosevelt was scheduled to broadcast a radio message to the nation from the White House. 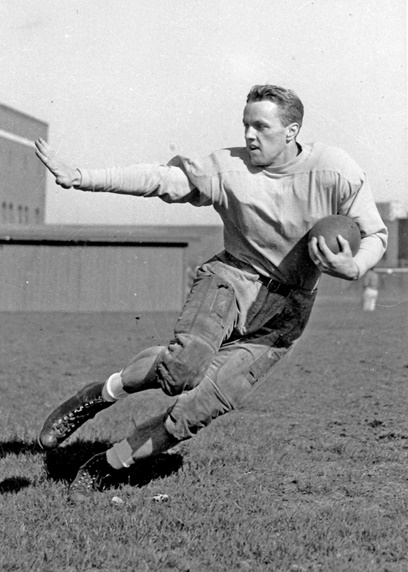 Bruce Smith won the Heisman Trophy and then became a Navy fighter pilot.university of minnesota

Smith stepped to the front of the banquet room at the Downtown Athletic Club.

“I think America will owe a great debt to the game of football when we finish this thing off,” Smith said. “It teaches team play and cooperation and exercise to go out and fight hard for the honor of our schools, and likewise, the same skills can be depended on when we have to fight like blazes to defend our country.”

That 1941 Minnesota team would serve as only one example of the bonds between sports and country as athletes stepped forward to serve in the miliary. Big names or future big names like Chuck Bednarik, Joe DiMaggio, Tom Landry and Ted Williams either volunteered or got drafted.

That year the Golden Gophers delivered Minnesota its second consecutive national championship and fifth during the FDR administration. In the years that followed, nearly all of the players on that 1941 team joined the war effort, including Smith, who would serve as a Navy fighter pilot.

“That’s just what you did back then. It was a call to a higher duty,” said Danny Spewak, a Minneapolis-based reporter who wrote “From the Gridiron to the Battlefield: Minnesota’s March to a College Football Title and into World War II” (2021, Rowman & Littlefield).

Spewak was drawn to that team knowing his grandfather played on Minnesota’s freshman team in 1941 and would enter the service himself two years later. It was a time when patriotism ran deep, as teams throughout the country played in memorial arenas and stadiums dedicated to those who served in the previous world war. Such was the case with the Golden Gophers, who attracted crowds of more than 60,000 to Memorial Stadium, most of whom paid a total of about $14 for season tickets to all five home games.

“Football gave, especially in Minnesota, the community a chance to come together. The state pride was incredible at the time,” Spewak said. “Minnesota was the dynasty in college football.” With the looming threat of war, he said, football provided a distraction for families worried about the future.

Some of those other 1941 teammates who served, as detailed in Spewak’s book:

■ Reserve fullback Mike Welch, who earned a Purple Heart for saving shipmates after the USS Tide struck a mine off the coast of Normandy.

■ Running back Joe Lauterbach, who lost his left leg in the same battle in Iwo Jima.

Those men, and all the men and women who served, built a lasting legacy that still resonates today.

As Spewak writes, “They won eight games, lost zero, and two weeks later found themselves in the middle of a war that would determine the course of civilization.”

They won that one, too.