World Cup 2022 live updates: Tunisia vs. France tied at half


Sri Lanka, which was torn by ethnic and religious violence in recent decades, has witnessed something new in the wake of the ongoing mass protests against the government’s economic mismanagement, which has sparked one of the worst financial crises in the South Asian country’s history.

The demonstrations have brought together young people from traditionally opposing sides and fostered unity across ethnic and religious divides.

Some young Sri Lankan protesters told DW that they’re fed up with traditional politics, which exploited ethnic and religious divisions for political gain.

In the past, for educated, middle class Sri Lankans, policies concerning ethnicity and religion were the deciding factor in elections, said Rajitha Hettiarchchi, a writer and lawyer.

For poorer sections of society, however, the state of the economy was the most important issue, he added.

“With the current protests, there was finally a meeting between the two. There is a widespread realization that the corruption in politics was propelled by using ethnic and religious divisions.”

The island nation has been rocked by mass protests over the past couple of months amid acute shortages of essential items like food, fuel and medicines as well as soaring inflation while the government struggles to tackle a severe balance of payments crisis.

Many young people have taken part in the demonstrations and launched a social media campaign with a simple message: “Gota go home,” which became a trending hashtag on Twitter.

Violence erupted two weeks ago after clashes between government supporters and protesters in the capital Colombo sparked nationwide unrest, leaving nine people dead and about 300 injured.

The violence drew global attention to the worsening political and economic situation in the South Asian country.

Mahinda Rajapaksa, the president’s elder brother, resigned as prime minister after the unrest.

Despite efforts by Wickremesinghe to stabilize the economy, the situation remains dire.

Nuzly Hameem, a civil engineer in Colombo, says he is spending nearly 25 times more on food now than what he did at this time last year.

Hameem is afraid he won’t be able to afford to buy food in a few weeks if the situation doesn’t improve. While the prices continue to surge, the threat of losing his job looms large.

“The company I work for has informed me that my salary will be slashed by half from next month. A bag of cement used to cost 800 rupees and now it is over 6,000 rupees,” he said, underlining the difficulty of carrying out construction projects in the current circumstances. 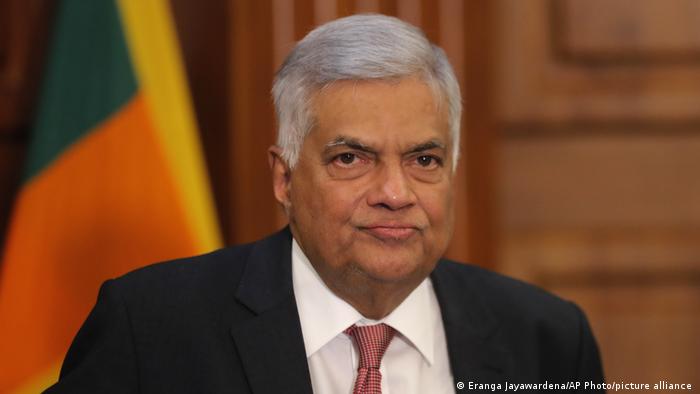 Despite efforts by PM Wickremesinghe to stabilize the economy, the situation remains dire

Mahin (name changed), a junior project manager working for a tech start-up, says he isn’t sure if he will be able to commute to work in the coming days.

He told DW that he had spent around 21 hours on May 21 standing in a line at a gas station to refuel his car. Still, he was able to buy only 15 liters of petrol despite his car’s capacity to take in 33 liters.

“It takes more than an hour to book an Uber, and it’s practically impossible to find a tuk-tuk driver anymore. Most of them cannot afford the fuel,” Mahin pointed out.

In recent weeks, there have been reports of young people leaving Sri Lanka to escape the economic misery.

While the economic turmoil and unrest have hurt the key revenue-generating tourism sector further, some youngsters like Shenelle Rodrigo, a popular Sri Lankan model and traveler, are trying to change the narrative and promote the country as a safe tourist destination.

They hope that an influx of foreign tourists and currency would help the country overcome the crisis.

Hettiarchchi said that many Sri Lankans, particularly the youth, have lost faith in political parties, both ruling and opposition ones.

“Neither the government nor the opposition has presented a concrete economic plan we can trust. Even the smaller parties are keen to criticize but don’t offer a solution,” he pointed out.

The lawyer said that the ongoing protests, which managed to unite Sri Lankans across ethnic and religious divisions, were putting a lot of pressure on President Gotabaya Rajapaksa’s government.

At a protest site recently, he said, “there was a girl wearing a hijab who spoke about unity in both Sinhala and Tamil languages and the speech was beautiful. Muslim men were cheering and filming her. It was a powerful moment. It was really helpful.”

Hettiarchchi believes that the protests won’t die down until the economy recovers and there are genuine political reforms, which would reduce the executive power vested in the presidency.

The World Bank last week said it was not planning to provide any new financing to Sri Lanka until an adequate economic policy framework has been put in place.

Colombo is also in talks with the International Monetary Fund (IMF), whose Managing Director Kristalina Georgieva recently said the lender was “working relentlessly” at a technical level on Sri Lanka.

Even if the country manages to strike a deal with the IMF, it will take a few months for the financial help to kick in, Hettiarchchi noted, stressing the need for the government to come up with a stop-gap solution until then in order to improve their electoral prospects at the time of next elections in two years.

“This will provide the time for a new political party to form as well,” he said.