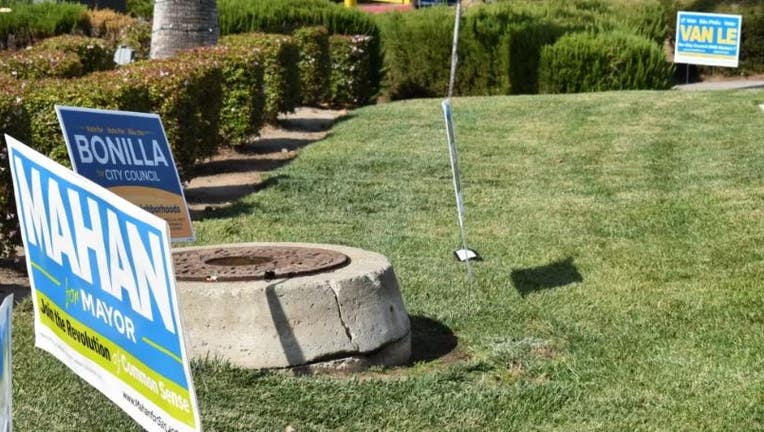 San Jose City Council candidates Rolando Bonilla and Van Le, as well as mayoral candidate and Councilmember Matt Mahan, said many of their election signs have been destroyed or taken. Photo by Lorraine Gabbert

SAN JOSE, Calif. – Campaign signs have been torn from lawns and cut from fences in this year’s San Jose elections.

Candidates Rolando Bonilla, Van Le and Matt Mahan are dismayed by these acts of vandalism and theft, but said it won’t discourage them from running for office.

Mahan is running for San Jose mayor, with Mayor Sam Liccardo terming out.

Local and small scale campaigns depend on lawn signs for building name recognition, especially for lesser-known or first-time candidates.

People have asked her if she withdrew from the race after about 175 of her signs were removed from Vietnam Town overnight.

After replacing them, they were taken again, she said. In some locations where multiple candidate signs were displayed, hers were the only ones removed.

“It’s very disturbing,” she told San Jose Spotlight. “It shocks me people did that. Why do they just pick on my sign?”

Lee and her volunteers are frustrated. The thefts have also been costly. Each campaign sign costs $4 to $8. Le ordered 400 more signs after the first batch was taken and lost about 250 signs in the second batch.

“Volunteers who put out the signs for me are very upset,” she said. “My team and I worked very hard to raise funds to purchase all of the signs.”

Still, Le said this will not deter her from campaigning

In California, petty theft is a misdemeanor punishable by imprisonment in the county jail for up to six months, and/or a maximum fine of $1,000.

Petty theft is defined as wrongfully taking or stealing someone else’s property when the value of the property is $950 or less.

This crime can carry a maximum sentence of up to three years in prison.

Bonilla said the removal of campaign signs is dirty politics. He said it’s sad that people resort to these tactics rather than debating issues.

“It is what’s wrong with this process,” he told San Jose Spotlight. “We should be talking about the candidates … but instead they spend hours stealing our signs.”

Bonilla said he suspects his volunteers are being followed, because within a few hours they find the signs torn down and tossed to the side.

He said his campaign won’t be deterred by intimidation tactics.

“It’s a very organized effort attempting to quiet our perspective,” he said, “but it’s not going to work. For every sign lost, two will go up.”

Bonilla said he hasn’t contacted the police because they have more important things to do in the community. He posted a photo on social media allegedly showing a truck taking his signs and asked people to contact the police department if they see it.

“They can focus on negativity,” he said. “We will not.”

Mahan said he lost hundreds of signs and has sites where his team had to replace signs daily. He said this is happening citywide both in front of people’s homes and commercial districts where they received permission to post their sign.

Someone even pulled a sign off the hanger and tore it in half in front of his office, he said.   “It’s really bad,” Mahan said. “It’s much worse than it was in my council race two years ago. It does feel targeted.”

Mahan said the consistent sign removal is concerning as it has a chilling effect on civic engagement.

He said if people are destroying his signs to discourage his campaign, it has had the opposite effect. His supporters are fired up.

“It’s a shame because it discourages civic participation when people feel attacked for getting involved in something they believe in,” he told San Jose Spotlight.