The politics of police at Pride parades- POLITICO

The politics of police at Pride parades- POLITICO


Happy Pride Month, Illinois. Summer festivals — and an election — are finally in sight.

Richard Irvin’s decision to boycott Aurora’s Pride Parade because police officers aren’t allowed to march in full uniform is fueling a political debate about the relationship between law enforcement and the LGBTQ+ community.

The mayor of Aurora and GOP candidate for governor defended the move, saying the appearance of uniformed officers is “one of the basic principles of community policing,” according to a statement.

But critics say Irvin is playing politics. “LGBTQ people are six times more likely to be stopped by police and three times more likely to be incarcerated than non-LGBTQ people,” Equality Illinois CEO Brian Johnson told Playbook. “Instead of expressing curiosity about why his LGBTQ constituents may fear armed police officers walking with guns in the Pride Parade, Mayor Irvin is trying to score cheap political points.”

Chicago officers won’t be marching at all: A staffing shortage is keeping Chicago Police officers out of the Chicago Pride Parade on June 26.

The LGPA has 100-plus members, so marching in the parade means other officers would not get their days off, Richardson added. With summertime comes increased policing to address spikes in crime and more monitoring of outdoor events.

If they did march, Chicago officers would be in full uniform, Richardson said. “We were already approved to wear our uniforms in the parade.”

Other cities are having the same debate: The New York City Pride Parade also prohibits LGBTQ police officers from marching in uniform, a point criticized by New York Mayor Eric Adams. He hasn’t said yet if he’ll skip the march. And the San Francisco Pride march, one of the largest in the world, is also banning officers from being in full uniform. T-shirts with their police insignias are OK.

— VALLAS IS IN | Calling Chicago a ‘city in crisis,’ Vallas reprises campaign for mayor: “I’ll tell you who my constituency is. It’s anyone who feels that the city is becoming increasingly unsafe and wants to ensure that, wherever you live, you’re safe and secure,” former CPS CEO Paul Vallas told the Sun-Times in announcing his second run for mayor, Fran Spielman reports.

Buckner would invest both in police and alternatives: Among his proposals “filling vacant positions in the Chicago Police Department and hiring more detectives to try to get through the department’s case backlog — a promise he made despite the city’s recent struggle with recruiting and retaining officers,” by Tribune’s Alice Yin and Gregory Pratt.

Have a news tip, suggestion, birthday, anniversary, new job, or any other nugget for Playbook? I’d like to hear from you: [email protected]

Illinois has officially expanded its Earned Income Credit. What does that mean for hardworking families? 1 million+ low income residents are now eligible for additional tax relief. And 3.6 million Illinoisans will receive even more financial assistance. But that’s just the start of our work to make our state’s economy fairer. Learn More Here.

In East St. Louis at 9 a.m. for a political event “discussing the importance of protecting reproductive rights.”

At Daley Plaza at 10 a.m. for a flag raising ceremony in honor of Pride Month.

— OPPO | As Aurora mayor, Richard Irvin quietly launched firm with a top aide plus two others, who got a city contract: “As Irvin seeks to become Illinois’ next governor while running for the GOP nomination on June 28, the episode joins other previously disclosed arrangements in raising questions about where Irvin draws the line between public duties and private ventures,” by Tribune’s Joe Mahr and Ray Long.

— Illinois governor’s race outpaced national contests for ad spending in May: “The most expensive political race on the ad airwaves in May wasn’t the closely fought Pennsylvania Senate GOP primary… or Georgia’s high-profile GOP gubernatorial race. It was Illinois’ gubernatorial race” for a primary at the end of June, according to the ad-tracking firm AdImpact, NBC reports.

— Tribune Editorial Board endorses Paul Schimpf in GOP governor primary: “Schimpf has the right combination of ethical past actions, a history of public service involving working with a Democratic majority and a raft of interesting and creative ideas when it comes to fixing Illinois’ ongoing pension crisis, painfully high taxes, troubling talent drains, government bloat and the state’s existential struggles with violent crime,” according to the endorsement.

— Daily Herald endorses Giannoulias and Brady: “What Giannoulis brings is a well-crafted plan for addressing the challenges of the office.” For Brady, it’s “electability.”

— LGBTQ policy: Alexi Giannoulias wants to allow residents gender-neutral designations on their driver licenses or state ID cards — something the General Assembly has already approved but the Secretary of State’s Office has been unable to implement because of a vendor contract already in place. In a statement, Giannoulias said it’s “unacceptable” that the office hasn’t been able to make the change.

— Anna Valencia, a Democratic secretary of state candidate, has been endorsed by United Steelworkers Local 1899. In a statement announcing their endorsement, the union noted Valencia’s working-class background.

— Sam Yingling is out with a digital ad in his race for the state Senate in the 31st District that includes Lake County. The ad, titled, “Report Card,” addresses guns, abortion rights, and being an LGBTQ elected official.

— Marie Newman’s new ad gets to the point. “You’re going to hear a lot sh*t about me from my opponent, Sean Casten,” she says in the ad for the high-octane Democratic primary race in the 6th Congressional District.

— Pat Dowell has been endorsed by Posen Mayor Frank Podbielniak in her bid for the Democratic nomination for Congress in the 1st District.

— FIRST IN PLAYBOOK: Kari Steele is going up on TV today with an ad that gives some insight into who she is — and she takes a poke at Fritz Kaegi, her opponent in the Cook County assessor’s race.

— Debate no-show: Cook County Sheriff Tom Dart was a no-show at a candidate editorial board meeting at the Daily Herald. He’s been fighting to keep Carmen Navarro Gercone off the ballot. But a judge last week ruled she’s staying on.

— Nursing home bill aimed at increasing staffing, improving care signed into law by Gov. Pritzker: “The law is intended to keep nursing home operators from “playing both sides” by billing Medicaid extra for high-need residents without funding adequate staffing to provide the necessary level of care for those residents, Pritzker said. And for the first time, long-term care facilities will have to publicly identify their owners, who are often hidden by complex corporate structures,” by Tribune’s Clare Spaulding.

— How the newest federal prison became one of the deadliest: The Special Management Unit at the new U.S. penitentiary in Thomson, Ill. — “a program meant for some of the most violent and disruptive prisoners” — has seen five suspected homicides and two alleged suicides since 2019. Investigation by the Marshall Project and NPR.

— The refurbished Gateway racetrack in Southern Illinois is ready to host the NASCAR Cup Series for the 1st time, by The Associated Press 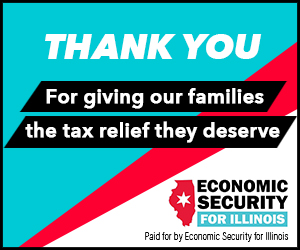 Early voting finally gets underway in the city at downtown supersite: “In-person early voting in the rest of the city begins June. 13,” by Sun-Times’ Stefano Esposito.

… 11 guns recovered during party at North Ave. Beach on Memorial Day: ‘Why do you need a gun to enjoy the beach?’ by Sun-Times’ Tom Schuba.

— CPS librarian who’s spoken out against library cuts said she expects to lose her job, by Tribune’s Tracy Swartz.

— Pfleger tells graduates he thought of taking his own life, by Crusader’s Chinta Strausberg reports.

— The Lake Villa GOP was supposed to raffle off five guns, including an AR-15 rifle. But mass shootings in Buffalo, N.Y., and Texas led to the event’s indefinite postponement, by Lake County News-Sun’s Steve Sadin.

— What candidates for governor say about state funding help for Bears’ move to Arlington Heights, by Daily Herald’s Marni Pyke

— FIRST IN PLAYBOOK — NEPOTISM: The Cook County Board of Ethics is suing Board of Review Commissioner Tammy Wendt for violating a county ban on nepotism. The board names Wendt’s cousin Todd Thielmann, who was hired as a top aide in the office. The lawsuit calls for Thielmann to pay back his salary. Here’s the lawsuit

We asked what’s the worst thing a political candidate can do to lose your support: City Club’s Ed Mazur rejects candidates who “refuse to answer a reporter’s call about an issue. It indicates there is something to hide from the electorate.” … Candidates lose Patricia Ann Watson’s support when they appear “arrogant, divisive, entitled, a fiefdom builder, dismissive, or bereft of an authentic soul.” … Leo Driscoll: Candidates who don’t support “restrictions to gun laws or who refuse to support a woman’s right to control her reproductive choices. Either one is a deal breaker.” … Timothy Thomas Jr.: “Becoming a public opinion weather vane on issues of the day in the interest of votes instead of what is right.” … Joe Desparrois: “Any candidate who dismisses a need to engage in gun control conversation is out my support or respect.”

When have you marched in a parade? Email [email protected]

— Laurie Glenn, who heads the public affairs and political consulting firm Thinkinc., has received the National Order of Merit from France. Over the years Glenn has worked with with the French Consulate in Chicago and the U.S. Embassy in Paris on exchange projects. Glenn will be in Paris later this week to receive the honors. She was nominated by Fabrice Rozie, the former cultural attaché in New York and Chicago.

— Ken Griffin gives $5M to help Miami prepare for disasters: “The billionaire hedge fund mogul is so far the biggest donor to a new fund meant to help the city in the event of a hurricane,” via Bloomberg.

In Taiwan, Sen. Duckworth pitches Illinois business; pledges security support as China threat looms: “The Chinese government is blasting Sen. Tammy Duckworth’s visit to Taiwan as it steps up its threats against the island it claims,” by Sun-Times’ Lynn Sweet

— ‘It’s going to be an army’: Tapes reveal GOP plan to contest elections, by Heidi Przybyla for POLITICO

— Biden sees exodus of Black staffers and some frustration among those who remain, by POLITICO’s Daniel Lippman

TUESDAY’s ANSWER: Congrats to photographer Fred Stein for correctly answering that Pat Pieper was a peanut vendor who talked his way into becoming the Chicago Cubs field announcer in 1916, a job he had until 1974. Away from the field, he was a waiter/maitre de at the Ivanhoe Restaurant at Clark Street and Wellington Avenue, now a Binny’s.

For three years we fought to expand the Earned Income Credit in Illinois. And in April, lawmakers in Springfield made it a reality.

We owe this victory to our partners in the fight.

Because of your efforts,

• Almost 1 million more Illinoisans, mostly lower income residents A18-24 and A65+, are now eligible to receive more financial relief during tax season.
• The existing 3.6 million EIC recipients will get a much-needed income boost with a tax credit increase from 18% to 20%.
• Per the state’s new budget, most families will be able to collect $50 per individual or $100 each for up to three child dependents.
• All together, these measures will direct hundreds of dollars each year to all low- and middle-income families in our state.

And that’s just the start of our mission to build a more equitable economy in Illinois. Learn more here.