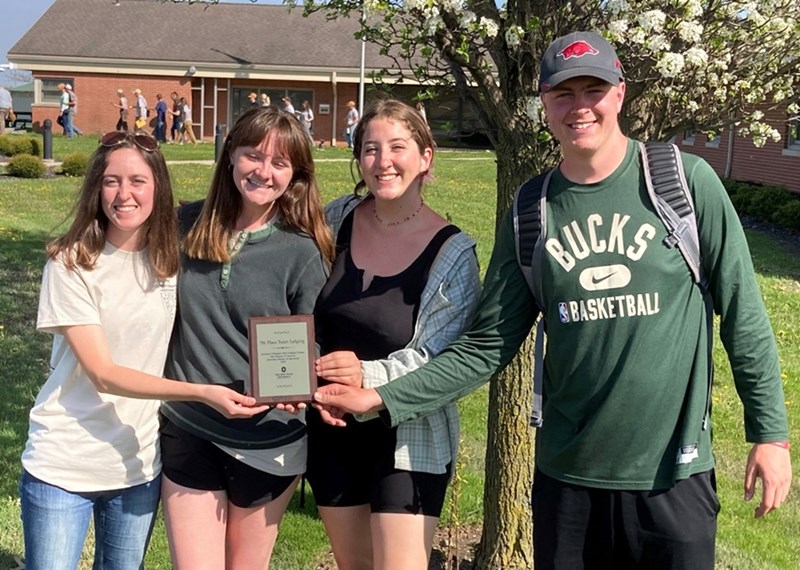 U of A’s soil judging team, made up of students in the Department of Crop, Soil and Environmental Sciences, earned a spot in the national contest for the 10th time in 12 years by winning the Region IV title in the fall.

The U of A soil judging team recorded a top-20 national finish competing in the National Soil Judging Contest, hosted by Ohio State University in April.

Competing among the top 21 teams in the country, Arkansas finished 16th overall and was seventh in the group-judged portion of the contest, which was held near Marysville, Ohio.

The team, made up of students in the Dale Bumpers College of Agricultural, Food and Life Science’s Department of Crop, Soil and Environmental Sciences, is coached by University Professor of applied soil physics and pedology Kris Brye.

“The team battled the weather and challenging soils and landscapes during the three practice days,” Brye said. “In the end, I was extremely proud of the team’s collective accomplishment with their seventh-place finish in the group-judged part of the contest. Bringing home hardware from a national contest was no easy task. I’m pretty sure the students will remember their week in Ohio for a long time.”

Arkansas earned a spot in the national competition by winning the Region IV title in the fall at West Texas A&M University in Canyon, Texas.

About the Dale Bumpers College of Agricultural, Food and Life Sciences: Bumpers College provides life-changing opportunities to position and prepare graduates who will be leaders in the businesses associated with foods, family, the environment, agriculture, sustainability and human quality of life; and who will be first-choice candidates of employers looking for leaders, innovators, policy makers and entrepreneurs. The college is named for Dale Bumpers, former Arkansas governor and longtime U.S. senator who made the state prominent in national and international agriculture. For more information about Bumpers College, visit our website, and follow us on Twitter at @BumpersCollege and Instagram at BumpersCollege.

About the University of Arkansas: As Arkansas’ flagship institution, the U of A provides an internationally competitive education in more than 200 academic programs. Founded in 1871, the U of A contributes more than $2.2 billion to Arkansas’ economy through the teaching of new knowledge and skills, entrepreneurship and job development, discovery through research and creative activity while also providing training for professional disciplines. The Carnegie Foundation classifies the U of A among the few U.S. colleges and universities with the highest level of research activity. U.S. News & World Report ranks the U of A among the top public universities in the nation. See how the U of A works to build a better world at Arkansas Research News.