As one major women’s soccer tournament nears its conclusion, another is pushing towards its final preparations.

Last Wednesday, during what has been a record-breaking Uefa European Women’s Championship, organisers marked one year to go until the start of the 2023 Fifa Women’s World Cup, which is being held at ten venues in nine cities across Australia and New Zealand, two countries that will be staging the showpiece tournament for the first time.

Given the success of the previous edition in France, an occasion widely credited for showcasing the commercial credentials of women’s soccer to the wider sporting community, the buzz that already exists around next year’s event is understandable. Yet the world in which Australia and New Zealand submitted their bid documents to soccer’s global governing body at the end of 2019 was somewhat different to the one in which they will end up hosting the tournament.

Back in June 2020, the trans-Tasman bid team learnt that they had beaten Colombia to secure hosting rights via a video call watched in the early hours from a small room in Sydney. Since then, plenty of planning has had to be done online, stadium walkthroughs have taken place virtually, and other trips have been delayed because of the pandemic.

But with 12 months to go until the event kicks off, Dave Beeche (pictured above), who was appointed chief executive of the 2023 Women’s World Cup in June 2021, tells SportsPro that the local organising committee is “really well placed operationally and engagement-wise” to deliver the tournament.

In 1 YEAR, we will go #BeyondGreatness!

‘A challenge we really relish’

Several milestones have already been ticked off, such as the launch of an official tournament logo and last year’s schedule announcement, which included the news that the final will be played at Sydney’s 83,500-capacity Stadium Australia, host of the 2000 Olympic Games.

Still, Beeche says he and his team are preparing for what he describes as “a massive programme of work” in the run-up to the Women’s World Cup. A large number of stadium and training site upgrades are due to be completed before the event gets underway, while there is also the small matter of ticket sales, the finals draw, and a new ten-team playoff tournament taking place in New Zealand in February to decide the last three spots for the competition.

Beeche now oversees a local organising committee of around 160 staff and the size of the operation perhaps reflects the fact that next year’s Women’s World Cup will be the biggest ever. The event in Australia and New Zealand will be the first iteration of the tournament to be co-hosted by two countries, while it will also be the inaugural edition to feature 32 teams after Fifa took the decision in 2019 to expand the event from 24 nations. Beeche believes that will result in “a good blend” of established and new teams, including debutants like Morocco, Vietnam and the Philippines.

More broadly, those firsts will have created certain challenges, especially in a Covid environment, but it also means that women’s soccer will be showcased in some of the region’s most recognisable venues, including Auckland’s Eden Park, Suncorp Stadium in Brisbane and a brand new Sydney Football Stadium. 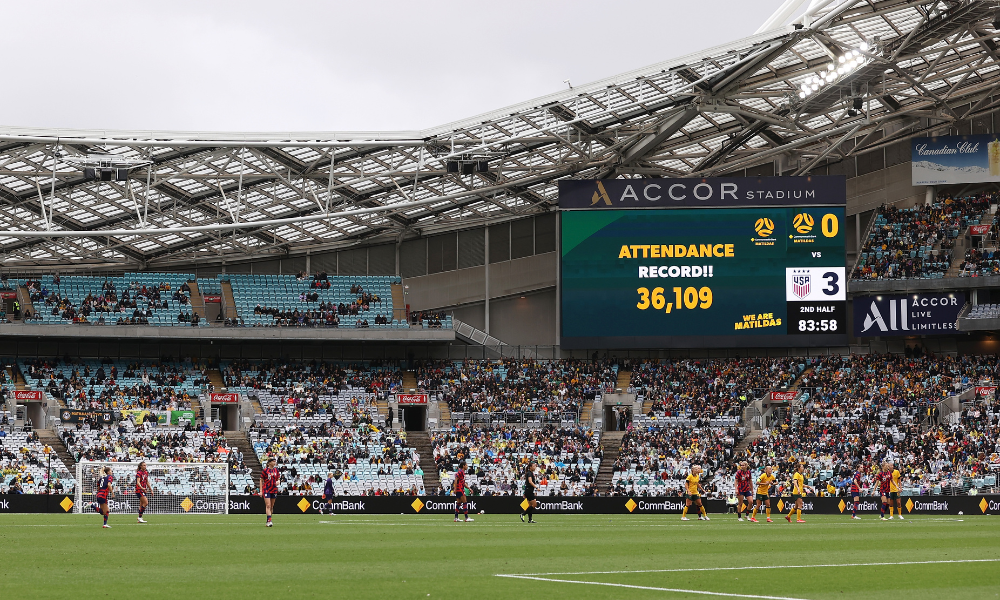 Stadium Australia in Sydney, which has a capacity of more than 80,000, will host next year’s final

Being able to move freely again between the two countries will no doubt have made processes more efficient, but so too will the experience of both nations in hosting major international sporting events – not to mention a growing portfolio of women’s sport properties.

Australia has staged the ICC Women’s T20 World Cup and Commonwealth Games in recent years and over the next decade is also slated to welcome an Olympic Games, two Rugby World Cups and a Netball World Cup, among many more. New Zealand, meanwhile, hosted the most recent ICC Women’s Cricket World Cup and is preparing for the rescheduled women’s Rugby World Cup later this year.

The level of engagement and support is nothing like I’ve seen before, in terms of wanting to make the most of the opportunity that’s afforded by hosting the world’s biggest women’s sporting event.

According to Beeche, who himself is well versed in the sports, events and tourism sectors from his stint leading Ironman Oceania, that expertise means there are “well-trodden pathways” in engaging with government agencies, host cities, and “all the people who wrap around these tournaments to make them happen”.

He adds: “What that means is that the basics in terms of the established communication channels and the groups that get together around things like safety and security from a government perspective is now in place. So what we can focus on is how we leverage this tournament for the maximum positive impact for each country – both social, economic and all those broader benefits that these tournaments can deliver.

“The timing of this [tournament] is, I think, fantastic from a women’s sport perspective. Both countries have made public commitments around what they want to do for women’s sport. So I think the level of engagement and support is nothing like I’ve seen before, actually, in terms of wanting to make the most of the opportunity that’s afforded by hosting the world’s biggest women’s sporting event.”

‘The market is now demanding it’

The size of that opportunity was illustrated by the 2019 Women’s World Cup in France, which Fifa says was watched by a combined 1.12 billion viewers across 205 territories, a figure surely set to rise next year given the expanded schedule of 64 games. A report also found that the tournament delivered a €284 million (US$291 million) boost to the French economy as 1.2 million spectators flocked to the event, further highlighting what Australia and New Zealand stand to gain from hosting the tournament.

Speaking during a SportsPro event last year, Jane Fernandez, the chief operating officer for the 2023 Women’s World Cup in Australia, said the event was on track to sell around 1.5 million tickets despite the impact of the pandemic. Commenting now, Beeche says he is “reasonably confident” that number “will stick”. Fifa has since announced that tickets will go on sale from 6th October, with prices starting at AUS$/NZ$20 (US$12.50) for adults and AUS$/NZ$10 (US$6.20) for children.

Those organising next year’s event will have been buoyed by what they’ve seen at the ongoing Uefa Women’s Euros in England, where the tournament’s attendance record was broken before the competition even progressed to the knockout stage. However, it should be said that Australia and New Zealand are more remote locations, while the ongoing cost of living crisis in many parts of the world, coupled with lingering caution over travel in the wake of Covid, might impact the number of international attendees.

Beeche, though, says “the early indications are strong” and suggests the hosts will be looking to market the fact that Australia and New Zealand are “bucket list destinations” for fans overseas. There will also likely be opportunities to attract spectators from APAC countries closer by.

“We do have good metrics on early registrations of interest,” Beeche continues. “One of the key things on the ticketing strategy is not to leap ahead of ourselves in terms of pricing the tournament and we do want to make it as accessible as possible. It’s really a family market here, which might be slightly different to some markets in Europe. Then we need to build around that to the major event followers and then around that to the general sport followers. So it’s kind of an onion ring effect in terms of how we’re going to take this to market.

“But we’re confident we’re going to go well. I think both Australia and New Zealand markets will embrace this event and I think the travelling supporter base for some of the stronger teams will grow this time around. We’re expecting a fair number of people to come down, watch a few games and then travel around other countries.”

Beeche adds that the aim is to “knock the lights out” when it comes to KPIs around attendance and TV audience, an achievement that would only drive further investment in women’s soccer. This will also be the first edition of the Women’s World Cup where the commercial rights to the tournament are unbundled from the men’s equivalent, a decision which has already seen Fifa secure global sponsorship deals with Visa and small business management platform Xero.

In addition, Fifa’s new commercial structure allows brands to sign deals related to specific women’s tournaments and Beeche says there is “strong interest from a local perspective” around partnership opportunities.

“Not only can Fifa now see that opportunity and is acting on that, but the market is now demanding it,” Beeche notes, discussing the growing appeal of the Women’s World Cup as a standalone commercial proposition. “20 years ago it was just bundled as part of a package of rights all centred around the men’s World Cup. I think those days are gone and there’s now a real appetite.

“There’s still a journey to go on to really materialise the full scope of this opportunity. With 2023 we’re taking a really big first step on that journey.”

How the tournament is ultimately remembered is likely to stem from how it performs commercially compared to similar previous events. Yet while France 2019 and Euro 2022 might set a bar for those that follow, Beeche says Australia and New Zealand are keen to put their own stamp on the tournament this time next year to ensure women’s soccer continues to grow outside of its core markets. 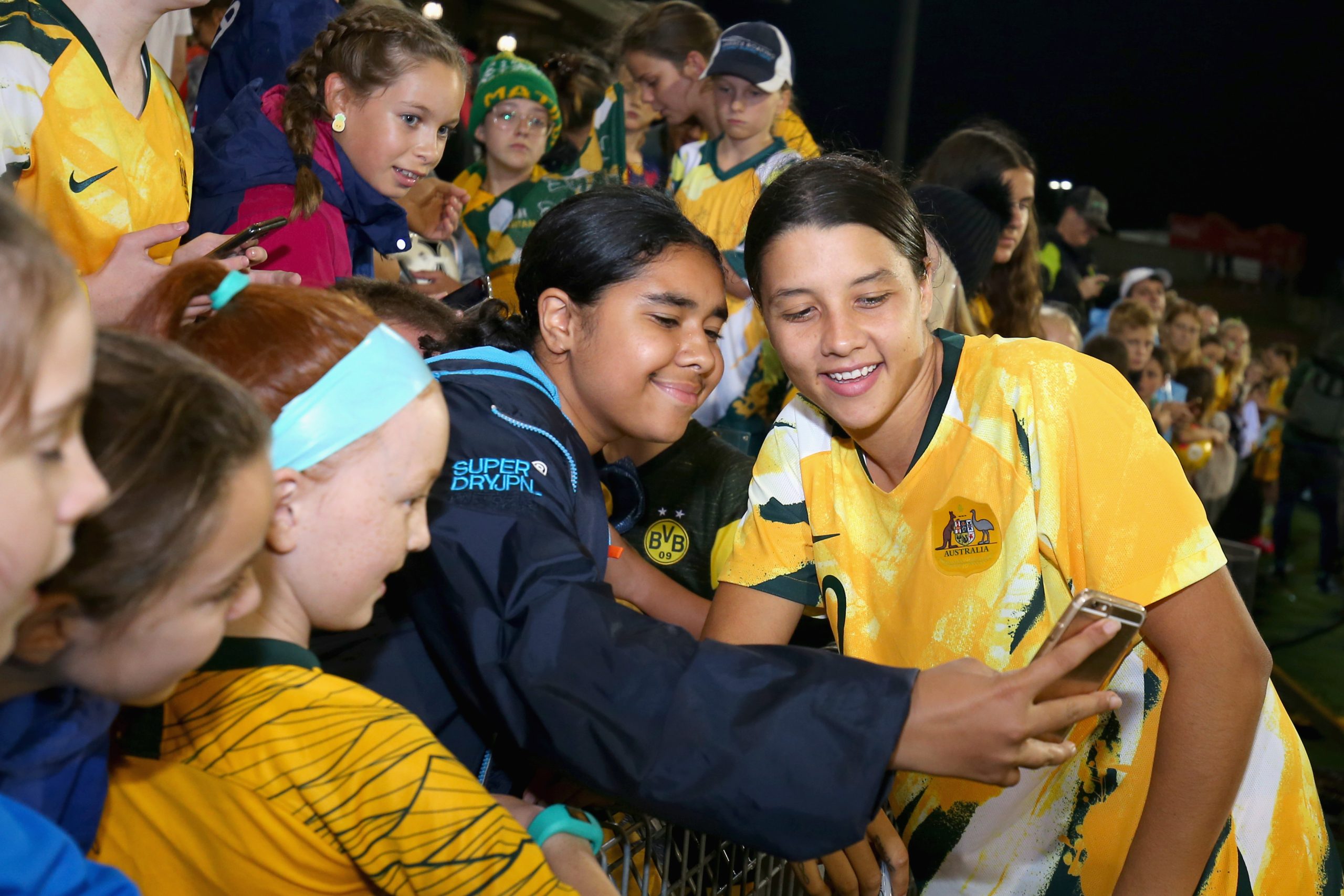 While major tournaments have generated valuable exposure for women’s soccer, one issue as the sport develops is that many of the players not competing in the most commercially mature leagues fall into obscurity in the time between them. It’s therefore increasingly important that the focus of these marquee occasions isn’t only on delivering big numbers, but also inspiring prolonged interest and participation that will sustain the sport in the long run.

To that end, Beeche points out that legacy plans are already finalised, published and being delivered.

“It’s a question we ponder a lot,” he notes, when asked how much he and his team look at past women’s soccer tournaments while plotting a path for 2023. “Naturally from our counterparts in Zurich the benchmark is 2019, that really was a tipping point, and all the growth metrics absolutely blew everyone away.

“So the opportunity with this tournament is how we help elevate and continue that growth of the game in terms of growing its spectator audience. And we’ve got a real opportunity to do that.”