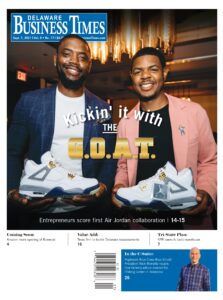 The redesigned print Delaware Business Times won its second national award by being named the best edited print newspaper by the National Federation of Press Women.

Both editor Jacob Owens and reporter Katie Tabeling earned awards in the National Federation of Press Women (NFPW) program that honors print journalism, television, radio, public relations, novel writing, and more. The wins in the NFPW program were prefaced by wins in the Delaware Press Association (DPA) contest, which serves as an affiliate to the national program.

“We are honored every day to cover and promote Delaware’s business community. To receive national recognition from our peers with so many awards is both humbling and amazing,” said Michael Reath, publisher of the Delaware Business Times. “Hats off to our partners around the state and especially to our editorial and design team for their outstanding work.”

In the national NFPW program, Delaware Business Times won first place for editing of a newspaper, one of two prizes given out for the entirety of the work in newspaper production. It’s the second national prize this year for DBT after it won a Bronze Medal in the Area Alliance of Business Publishers (AABP) awards program last month.

Owens also won first place for best feature story in a newspaper for his story “A Dream Realized,” which profiled the young entrepreneurs behind Eastside Golf who scored an exclusive shoe deal with basketball legend Michael Jordan last year.

Tabeling earned a second-place finish for a specialty article on social issues for her May 2021 cover story “Corporate Delaware addresses its diversity gap,” which detailed the lack of people of color leading Delaware’s largest employers and what is being done to encourage greater diversity among business leadership.

Owens also earned a second-place finish for obituary writing for his May 2021 obit on former Gov. Pete du Pont, which highlighted the governor’s service and impact on Delaware while talking with his contemporaries and colleagues.

Finally, Tabeling earned an honorable mention in business writing for her July 2021 cover story “The Big Leagues,” which covered the growth of the DE Turf facility in Frederica and how important sports tourism would be to Kent County’s economic future.