The 4th and newest edition of the Young Scientists Grinchenko – Seton International Journal has been published.

This electronic journal is a combined effort of both students and faculty at Seton Hall and the Borys Grinchenko Kyiv University in Ukraine. A Memorandum of Understanding was signed by the two institutions, and for over fourteen years, research, collaborative projects, virtual seminars and conference presentations have fostered study and exploration of important topics and issues. In addition to the publication of this journal, work by both alumni and undergraduates from both institutions attended an online meeting “Stand with Ukraine. Students in Wartime: A Virtual Bridge with Kyiv, Ukraine”.

It has been published during the ongoing brutal and unprovoked attack on Ukraine by Russia, this edition is unlike anything students have worked on in the past.

February 24, 2022, will remembered as the day Vladimir Putin began a war that focused on the destruction of Ukrainian ports, towns and cities, terrorizing innocent civilians. “The determination of our Ukrainian partners during this tremendously difficult time, inspired us to publish this fourth edition of our electronic magazine during this time,” explains James Daly, Ed.D., program co-founder and a professor in the Department of Educational Studies at the College of Education and Human Services. 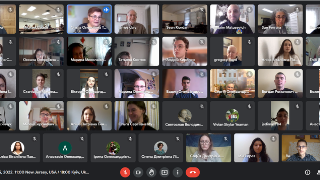 This close relationship makes the struggle of Ukrainians during this war personal. On Tuesday, April 5, 2022, the war in Ukraine was the topic of an online meeting: “Stand with Ukraine. Students in Wartime: A Virtual Bridge with Kyiv, Ukraine.” The session was organized by Dr. Olga Tarasenko and colleagues and administrators from Borys Grinchenko Kyiv University, along with professors Maxim Matusevich, Ph.D., Nathaniel Knight, Ph.D., and James Daly, Ed.D. from Seton Hall University. Over 100 people attended this international virtual event.

The meeting was attended by students from high schools around the country, who were joined by their teachers, who are also Seton Hall College of Education and Human Services alumni. There were high school students from the Collegiate Charter High School in Los Angeles and two classes of students from the American Art Academy in Chicago. There were also classes attending from the Somerset Hills Regional School District and Wayne Hills Regional High School, both in New Jersey. In addition, reporters were present and audience members from as far away as Israel joined the event.

The audience heard from students who had fled their homes and were suddenly refugees, from those who had been sheltering in subways, and those who described the horrors of the shelling and bombing since the invasion began. The Ukrainian students’ stories included loss, fear, courage, and determination. Following the session, a common word used to describe reactions to the event was ‘inspiring’.

“My colleagues, and I believe that readers will find this edition informative and inspiring.,” explains Professor Daly, “This publication supports university students by facilitating their ability to share their voices and their experiences. The topics cover a broad range of issues and interests, but specifically the crisis in Ukraine in this fourth edition. The first edition of this journal featured a bridge on the cover. The bridge on the cover of the first issue clearly demonstrated our commitment to helping students bridge their differences and discover their similarities.”

After the presentation, students from the Collegiate Charter School of Los Angeles were invited to submit their reflections, which became a new feature for the Young Scientists Grinchenko – Seton Hall International Journal.

Below are excerpts of the reflections from 11th and 12th grade students of the Collegiate Charter High School of Los Angeles about the online meeting “Stand with Ukraine. Students in Wartime: A Virtual Bridge with Kyiv, Ukraine”:

The testimony from the Ukrainian students really helped me gain a better understanding of the situation. Even though they were in the middle of the war, they said that they were still going to school, which took me back a bit, because it wouldn’t be the first thought to continue in my head. However, it was inspiring because they still wanted to continue their education and try to make the best of the situation.- Dieedra W.

I believe that the most valuable takeaway from this panel was hearing the personal stories of those who are suffering, but also those students who continue to push forward in their life. I understand that this war continues to harm, kill and destroy homes and yet there are students who continue to strive to create the future they decide, and no one is going to stop them. – Emily V.

Often overlooked are the stories of those at their core, the true human cost of history. Among the overlooked are the students of Ukraine. .These students encapsulate an adaptability, resilience, and courage unique to their national burden: the territorial defense of their sovereign, democratic state. – Diego C.

I specifically remember hearing a personal story of a student explaining how she had just barely escaped her home when just a few minutes later the jets she fled thundered by. Hearing the student’s voice change as she was telling the story and explaining how lucky she was to escape was very eye-opening. – Wilfredo B.

This edition features work from five students in both secondary education and liberal arts programs at Seton Hall. Similar to past editions, the students addressed a range of international issues and topics, including historic issues revolving around the democratic revolutions leading to the fall of the former Soviet Union.

Student contributors for this publication include the following: 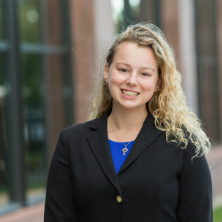 Mary Grace McNamara is a Junior Honors Student at Seton Hall University, where she is studying three majors: Secondary Education, History, and English. As President of the Honors Program Student Advisory Board, President of the Seton Hall History Club, and member of the Buccino Leadership Insititute, Mary Grace is committed to her academic community and her own independent learning. Through student teaching, private tutoring, and cultivating a curriculum for the Newark Tennis and Education Program, Mary Grace has a passion for teaching about the past and present in the world to promote a beautiful future. In this issue, McNamara looks at Japan and the role of nationalism, specifically teaching the young to be loyal through education and propaganda in the World War II era in her research. 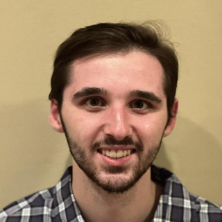 Nathan Yost is a rising senior Honors student attending Seton Hall University, majoring in Finance and History while also minoring in International Business. He has always been very passionate about history and loves traveling to new places, especially historical sites. Nathan is interested in politics and international relations and is considering attending law school to study international trade law after graduating from Seton Hall. Yost’s paper examines the fall of Communism in Hungary in 1990, which officially marked the end of communism as the first non-communist leader in Hungary in over 40 years was elected.

Vivian Yeaman studies Political Science, Russian, and East European Studies at Seton Hall University. Vivian hopes to enlist into the US Army after college and pursue a career in linguistics. The revolution that ended Communism in Latvia and the contributions that led to Latvia successfully declaring independence in 1991 is the focus of his paper.

Patryk Kurdyla, as a student of history, is fascinated by ethnic identity’s role in shaping historical memory. He has been particularly interested in nationalism’s effects on the European landscape. Patryk’s Polish heritage has played an important role in his quest for knowledge given nationalism’s continued significance for Central Europe’s inhabitants. He wants to understand the ways in which it has proven to be both a blessing and a curse for the region. Kurdyla presents research on Czechoslovakia’s Slovakian Dissident Movement, with a critical insight into the immense cultural differences between the Czechs and Slovaks, which would contribute to Czechoslovakia’s eventual dissolution. 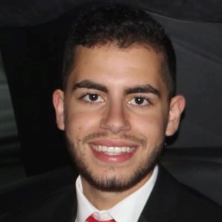 Brandon Rodrigues is a junior at Seton Hall University and is enrolled in the College of Education and Human Services pursuing a degree in Special Secondary Education and History. He is a first-generation college student. He is a mentor, substitute teacher, a member of the Kappa Delta Pi Honors Society, Dean List Scholar, and an active volunteer in his community. Brandon Rodriguez shared a paper that explores the background for understanding the complex and close relationship between Russia and Ukraine from the fall of the Soviet Union in 1991 to the Russian annexation of Crimea in 2014.

Additionally, Sue Ferrara, an independent writer, researcher, reporter, and attendee of the online meeting in April, was featured in the journal, who’s hope was to write a story about how some New Jersey teachers were discussing these current events in their social studies classes.

A school board member from a New Jersey public school district, Ferrera wrote because she was moved by the testimony from the Ukrainian students. In her article, she shares her reactions to the event. She also reports on her findings with school leaders, and their lack of efforts for addressing the Ukrainian war in classrooms around the state. What she found was that many school leaders are fearful of anything that might be considered controversial or that might raise community concern. Ferrera’s story was never published for the intended audience but is now rewritten for this academic e-publication.