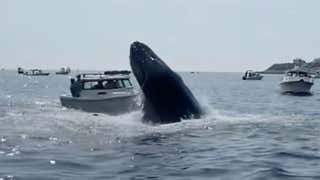 People are being evacuated from their homes and rescued from their vehicles in floodwaters across the St. Louis metro area after storms dumped a historic amount of rainfall on the area in just a few hours.

A flash flood emergency warning of a “life-threatening situation” was issued for the area through the late morning. This is the most severe and urgent flood warning that the National Weather Service issues.

Here’s the latest news from the area.

The heaviest rain is moving out of the city.

“Most of the flooding reports have been from St. Louis proper and areas northwest of there,” weather.com senior meteorologist Chris Dolce said.

There was one report of up to 11 inches.

“The worst of it seems to be over. There’ll be some moderate rainfall rates and some possibly heavy locally through mid-morning before it really tapers off,“ Dolce said. “Of course we’ve still got flooding ongoing.”

The rainfall is moving east, so people in its track need to remain vigilant.

“We’re seeing both flash flooding of urban areas and also in a lot of these creeks,” Dolce said. “It’s kind of a two-pronged thing. The creeks causing flooding and urban flooding overwhelming drains.”

Weather.com spoke to Ken Mebus, who lives in suburban St. Charles on the northwest side of the city.

A neighbor knocked on his door to alert him that the basement was flooding. Water also rose in the parking lot, flooding several cars.

“Initially it was just panic,” Mebus said. “Panic and fear. Especially with it kind of surrounding the apartment. There’s literally no way to go but up. With the way the flooding was, everything was surrounded. The river was almost right up to the building for the most part. The lot itself closed off any bit of exit for us out there. I was just nervous because the entire time I’m watching this I’m seeing the water increase and slowly creep up.”

Mebus and other residents lost personal items in the basement flooding including memorabilia, clothes and his washer and dryer.

The St. Louis Fire Department says six people and six dogs were rescued from homes in one neighborhood block. About 18 homes incurred “substantial flooding.” Some residents chose to shelter in place rather than be evacuated.

St. Louis Lambert International Airport has now picked up 7.90 inches of rain since just before 1 a.m.

That’s a little more than double their average monthly July rainfall in just over 6 hours.

A flash flood is one that happens suddenly, usually in the span of an hour, but sometimes in just minutes.

It can happen when heavy rain falls over already soaked ground or mountainous terrain, turning usually placid creeks and streams into rushing torrents spilling out of their banks.

Click here to read more on how to stay safe during this type of emergency.

Water is covering Interstate 70 in St. Peters, Missouri, according to social media posts.

A resident posted on social media that their home is flooding.

“Guys, please pray for me and my family, we are in the middle of a flash flood and it is getting very scary right now,” a tweet from the person read.

So much rain has fallen in such a short period of time that this is now St. Louis’ all-time record wettest day. Records here go back 148 years. The old record was set on August 20, 1915.

Evacuations were underway in the Foxboro subdivision in Ladue, Missouri, because of flooding, the Ladue Assistant Fire Chief Jeff Johnson told KDSK.

The St. Louis Fire Department said that water rescues are ongoing across the metro. They said that several vehicles were “completely submerged” on roads across the area.

Two local journalists got trapped in high waters and had to be rescued on I-70 westbound near the Jennings exit. “Our car ended up getting carried under the overpass,” KSDK reporter Sydney Stallworth said. “You would not believe the amount of cars stranded across the area.”

The National Weather Service in St. Louis said 6-10″ of rain has fallen across the metro area. Senior weather.com meteorologist Chris Dolce said that the flooding was caused by storms that “repeatedly soaked the same areas for multiple hours, similar to how a train would move down a track.”

Parts of I-70 are closed in both directions into downtown St. Louis because of high water.

This is a breaking news situation. Check back frequently for the latest updates.